Data servers account for about 40% of a data center’s overall power consumption  (1), and about half this power goes towards cooling, which is typically done by air conditioning the server rack rooms (2). This implies that cooling the servers accounts for about 20% of the overall power of a data center.  Assuming that 60 – 75% of the cooling power can be eliminated by direct heat rejection to air or water instead of air conditioning, this has the potential to cut the overall electric costs of data centers by 12 -15%.

The average operating power density for rack rooms in data centers is 179 watts per square foot (3).  At an average electricity cost of 8 cents per kilowatt-hour, the incentive for a 107,000 square foot (10,000 m2) data center to use direct-to-air/water server cooling is on the order of $ 2 million per year.

Where data center capacity is limited by the utility power supply, using QuantaCool’s MHPTM cooling technology instead of air conditioning the server rooms frees-up power to add ~15% more data servers, effectively de-bottlenecking the data center and allowing investment in new facilities to be avoided or deferred.

The standard data center cooling system requires multiple steps to transfer the heat from the data servers to the ambient environment: 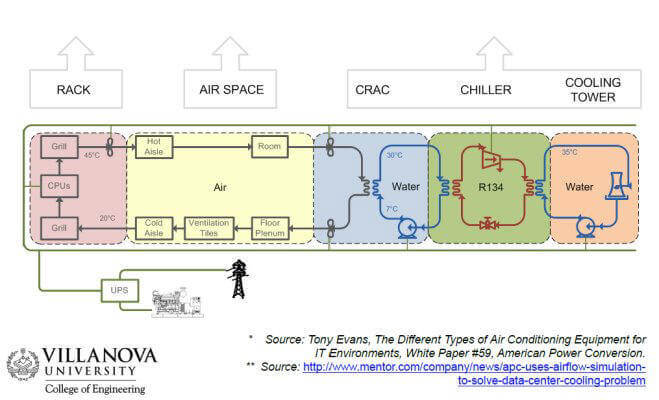 To maximize computing speed and performance, processors may be over-clocked (i.e. run at higher frequencies than normal), and often requires that the processor voltages be increased as well, to maintain system stability. This results in higher processor temperatures, as the power consumption increases linearly with the processor speed, and exponentially with the voltage. The achievable over-clocking is typically limited by the heat removal, as the processors will “throttle” above a critical temperature, to avoid damaging the chip.

Conventional severely over-clocked systems rely on water-cooled cold plates, with their attendant risks in the event of a leak (short-circuits; electric shock) or pump failure (nearly instantaneous loss of cooling, which can result in processor damage). Data centers often have to pay higher insurance premium when water-cooling is used, because a leak from even one server can spill and damage/destroy multiple servers in a rack. Water-cooled systems also require the addition of toxic chemicals to inhibit corrosion and prevent biological growth (algae, biofilms) that can coat and reduce the performance of heat transfer surfaces.

Furthermore, evaporation is more efficient for heat transfer than a pumped-water system, so the equipment runs cooler, allowing more extreme over-clocking. Evaporation runs at constant temperature across the cold plate, so the processors are cooled more uniformly than with liquid cooling. Evaporation absorbs 60 – 80 times more heat per unit of flow, so the circulation rate is much lower, allowing the use of smaller tubing. The refrigerant is non-corrosive, and does not support the biological growth, so there are no issues of corrosion or bio-fouling, hence so no degradation in cooling performance over time.

To reduce overall installation costs, it is advantageous to use concentrating photovoltaic (CPV) systems for solar electricity, since the cost per unit area of concentration devices (lenses, reflectors, etc.) is usually lower than the cost per unit area of active solar cells. However, increasing the concentration of the illumination also increases the heat load on the solar cells, and the electrical conversion efficiency decreases as the operating temperature of the cells increase.

Because of this effect, the there is a maximum concentration factor that can be achieved; above this maximum, the total electrical output of the cell decreases, due to the progressively lower efficiencies accompanying the rising operating temperatures. The solar cells need to be cooled to maximizing the optimal concentration factor and minimize overall system costs.

The optimal concentration factor for conventional passive cooling devices (e.g. finned aluminum blocks on the back of the solar cells) is on the order of 10x – 50x. With active cooling, such as pumped water-cooled blocks, the concentration factor can be up to 200 – 500x, but at the cost of greater system complexity and lower reliability and higher maintenance costs; failure of the cooling system can result in severe overheating and possible damage to the solar cells.

In contrast, QuantaCool’s MHP™ cooling technology allows even higher heat removal rates than active water-cooled systems, with the reliability of a passive cooling solution. Calculations indicate that optimal concentration factors in excess of 5000 suns should be feasible (see solar concentrator example) ; the concentration factor is limited by the physical constraints of the concentrator assemblies, rather than by the thermal load on the solar cells. This has the potential to significantly reduce the cost-per-kW of solar power systems.